The airline industry has always been a volatile one, with bankruptcies common in the sector. Last year was a significant 12 months for airline failures, as the pinch of rising fuel prices and labour costs, as well as rising interest rates, took their toll on carriers.

There were 53 airline insolvencies in 2018 as of 20 November, according to data from the AeroTransport Data Bank. European airlines were most vulnerable to insolvency, with 21 going bankrupt in 2018 (see Figure 1). Latin American airlines were the second most likely to go bankrupt by region, with nine airlines going bust last year. Middle Eastern and Southeast Asian carriers were third most likely, with five airlines from each region declaring themselves bankrupt in 2018.

It is not just in 2018 that airline failures were most prominent in Europe. This trend has been seen every year for the past decade, apart from in 2015, when Commonwealth of Independent States (CIS) airlines took the biggest hit. That year, 15 CIS airlines went bust compared with 14 European airlines. This is likely in part because of the international sanctions that were placed on Russia, the CIS’s biggest market, in February 2014. The sanctions contributed to the collapse of the Russian ruble and a national financial crisis, causing local airlines to struggle.

Transaero, Russia’s second-largest airline, went bankrupt in 2015, at which time it had a fleet of 97 aircraft. Local currency devaluations can often push carriers over the edge. Like many airlines, Transaero’s fleet was financed by US dollar debt and its leverage metrics increased substantially. Revenues, which were mainly in rubles, were unable to compensate for those increases.

There are a number of reasons European airlines tend to go bankrupt the most. These include strong competition, the appreciation of the dollar against the pound and the euro and the absence of Chapter 11. Some of these airlines may have shown poor management, leading to high leverage and weak capital structures. These carriers may be highly leveraged because they have easy access to debt capital.

“The sector remains fragmented despite consolidation, with around 200 airlines in operation and the top five carriers accounting for about 50% of intra-European seats,” says Angelina Valavina, senior director in the EMEA corporates’ utilities and transport team at Fitch Ratings. “This compares with a domestic market share of almost 80% for the four largest US carriers.

“The key difference is the fragmentation of the European market compared to the US and the very low cost base of European low-cost carriers, especially ultra-LCCs such as Ryanair and Wizz Air,” adds Valavina. 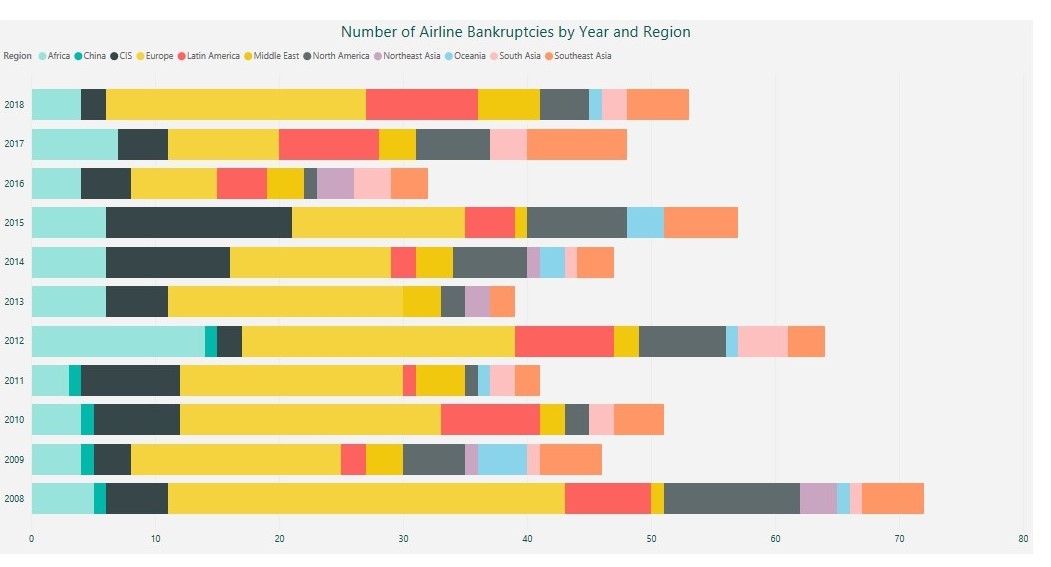 Wizz Air and Ryanair, for example, had a cost per available seat kilometres (CASK) of 3.5 USD cents and 3.6 USD cents in 2017 respectively (2017 are the latest numbers). In the US, Southwest Airlines’ CASK was 7.2 USD cents and Spirit’s was 4.8 USD cents.

“Market fragmentation and the very low cost base of the low-cost carriers create a very competitive environment and effectively lead to the default of uncompetitive carriers,” says Valavina.

“I don’t think Europe will see the same degree of consolidation as the US because Europe has more national flag carriers. As there are more regulatory and political requirements, consolidation will be slower,” she says.

In the past decade, 142 of the airlines that went bankrupt only had one aircraft in their fleet, 102 had two aircraft and 60 had three aircraft in their fleet (see Figure 3). Between 2008 and 2018, only 13 of the 522 airlines that filed for insolvency had a fleet of more than 25 aircraft. 2017 was a particularly tough year for the larger airlines such as Air Berlin and Monarch Airlines, which failed to withstand the pressures of a competitive European market.

The scale of the airline may play a role in most scenarios, but sometimes it does not make too much of a difference, because of factors such as whether it is state- or privately-owned. A government owning an airline might be more predisposed to bail it out of its financial woes, but a private owner of an airline, looking for a specific return, may have less sympathy. If statebacked carriers such as Alitalia or South African Airways were privately owned and suffered the same financial hardships, they may not have been flying today.

“If a company operates in a niche market where its operations are protected, scale may not play a role,” says Valavina. “But if it operates in an open European market where there’s strong competition, scale is more likely to be a factor.”

Airline stocks have taken a hit so far in 2019, after US carrier Delta Air Lines reduced its forecast for fare revenue growth for the fourth quarter of 2018. Share prices of Delta and several other airlines lost between 5% and 9% of their value.

“If you look at airline share prices, you’d think they were having a disastrous time financially,” Brian Pearce, chief economist at the International Air Transport Association (Iata), tells Airfinance Journal. “In Europe, share prices are down on average about 25% but actually earnings are still really good.

“The bankruptcies in 2018 actually came at a time when the industry as a whole in Europe was delivering profits not quite good as previous years, but still pretty good profits. I guess the issue is, that was not the case for every airline and there were some challenges. Obviously, there were Middle Eastern connections that led to some of those failures,” says Pearce, referring to Air Berlin’s bankruptcy after Etihad Airways, which owned a 29% stake in the German carrier, refused to continue funding it.

Airline failures in the past decade peaked in 2008, unsurprising given that it was in a middle of a global economic downturn (see Figure 1). Since then, these numbers have generally fallen, hitting a low in 2016 with 32 airlines filing for insolvency. However, since 2016, the number of insolvencies has risen: there were 48 in 2017 and there have been 53 in 2018 up until 20 November, when the data for this article was collected. 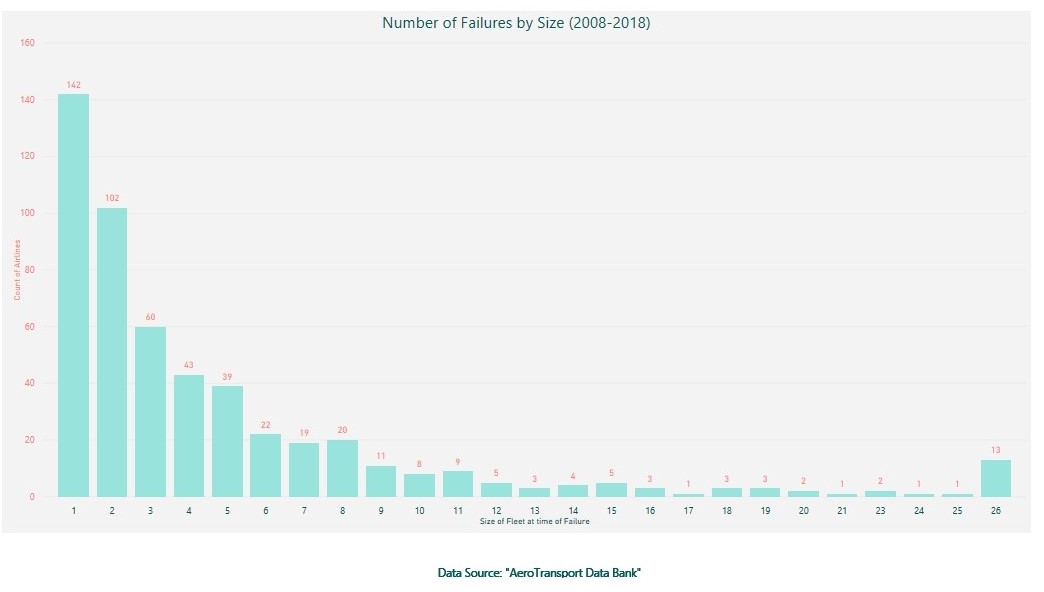 More M&A on the way?

In most cases, airlines with weak balance sheets and low levels of liquidity will go bust or be acquired by other, more financially stable airlines. Despite rising interest rates, there is still cheap access to liquidity but stagnant organic growth, driving mergers and acquisitions (M&A).

On a more micro level, Middle Eastern carriers are one of the key drivers of airline consolidation. However, this has levelled off because Etihad has its own issues to resolve and its strategic repositioning and restructuring. Despite increasing political tensions against Qatar from some of the other Gulf states, the national airline, Qatar Airways, retains its interest in buying equity stakes in other carriers. Last February, it relaunched Meridiana – an Italian carrier in which it owns a 49% stake – as Air Italy, showing an appetite to become part of the European airline consolidation story. On 3 January 2019, it announced it had purchased a 5% share in China Southern Airlines.

There are several airlines showing signs of financial weakness, but look likely to be acquired by another carrier. If the airline has a strong brand, access to valuable taking off and landing slots, could be seen as an “easy fix”, or has taken a significant bulk of the market share, then it is more likely to be acquired rather than left for dead.

In Europe, Norwegian has showed a weak balance sheet, after expanding too quickly and struggling to grapple with fuel price fluctuations and Trent 1000 engine delays for its Boeing 787s. UK regional airline Flybe has also been struggling financially for years, but recently a weak sterling, higher fuel costs as well as a softening of the short-haul market has caused it to post several profit warnings.

Only weeks after the airline posted its most recent profit warning, in October, Flybe was put up for sale, on 14 November, confirming it was in discussions with several parties about the sale of the company. Connect Airways, a joint venture owned 40% by DLP Holdings, 30% by Stobart and 30% by Virgin Travel, a wholly-owned subsidiary of Virgin Atlantic, agreed to acquire Flybe on 11 January.

European regional airlines have been under pressure and the market may go through a similar phase of consolidation as the US did in the 1980s. Then, some of the US regionals, such as Air Midwest, Ransome Airlines and Suburban Airlines, were bought out by the US major carriers, becoming subsidiary regional feeders.

Outside of the regional market in the US, some of the most significant mergers helped bail airlines out of bankruptcy. For example, US Airways merged with American Airlines in 2013 to save the latter from collapsing.

Europe has also seen some consolidation outside the regional market. On 30 November, Indigo Partners agreed to buy a stake in struggling Wow Air, the same day Icelandair announced it had ditched its planned acquisition of its lowcost rival.

On 5 November, Icelandair agreed to take over Wow, after both carriers showed strain on their balance sheets. However, Airfinance Journal reported on 29 November that both companies had agreed not to go ahead with the deal. Icelandic said it was unlikely that its board of directors could recommend to shareholders that they agree to the purchase agreement. Furthermore, the board did not intend to submit to the shareholders’ meeting a proposal to postpone decision-making on the purchase agreement.

Bogi Bogason, interim president and chief executive officer of Icelandair, said at the time: “The planned acquisition of Icelandair Group of Wow Air will not go through. The board of directors and management of both companies have worked on this project in earnest. This conclusion is certainly disappointing.”

Meanwhile, the chief executive officer of Lufthansa envisions the European airline industry consolidating so, eventually, there will be three global carriers in the continent. Speaking at an industry event in Berlin on 27 November, Carsten Spohr said: “There are way too many players in Europe. It is obvious that consolidation will act further and we as Lufthansa want to be part of that. There will most likely be three major European network carriers or groups of carriers, plus one or two low-cost guys.”

Iata’s Pearce says that the uncertain sentiment in Europe, which is pervasive around the continent because of Brexit and the rise of anti-establishment, reformist governments, may halt M&A in the European market.

Pearce does not think there will be bankruptcies this year on the scale of Monarch and Air Berlin in 2017. “I think those were specific business models failing. If we get a recession, then clearly things are going to be very difficult. But, despite the financial market signals, I think the consensus among the economists is that there’s still going to be growth in 2019.”

He adds: “The cost of fuel has plummeted, which takes a lot of pressure off the sector. Last year you were seeing sharp rises in fuel costs, which may have contributed to the bankruptcies, but that’s reversed now.”

Time will tell as to who will be the victors and the losers, but it is inevitable that the European airline sector will look different a decade from now.