Covid-19 - the impact on the lessors | Analysis | Airfinance Journal

Airfinance Journal has just published the 2020 edition of its popular special supplement “Leasing Top 50”. The publication evaluates the top 50 lessors’ fleets, orders and financial statements. Historically viewed as a low volatility sector for debt and equity investors alike, the analysis shows evidence of a pre-Covid-19 slowdown that has been compounded by the pandemic.

A total of 24 lessors are included in the financial analysis section of the supplement. This includes all the listed leasing companies plus privately owned lessors whose financials are in the public domain such as Dubai Aerospace, Aviation Capital Group, SMBC Aviation Capital and Aircastle. The Irish entities of some of the leasing groups are also included as are the UK listed closed end investment funds with leases to Emirates Airline, Norwegian Air Shuttle and Thai Airways.

Only four of the 24 straddle the Covid-19 era – SMBC Aviation Capital, Amedeo Air Four Plus - both 31 March 2020 year-ends and minimally impacted, if at all, during this timeframe – as well as Nordic Aviation Capital (30 June) and Avation Plc (30 June). The numbers for these two lessors show a significant impact on them – NAC’s rental revenue fell 19% compared with 2018/19, resulting in a $639 million loss in its 2019/20 fiscal year. Avation had sizeable exposure to Virgin Australia and booked impairments of $36 million, which caused net income to fall 62% to $10 million.

Adding the values from their respective 2019/20 financial year-ends, the 24 lessors owned approximately $170 billion of aircraft assets and had outstanding debt of $130 billion. Equity was $48 billion. Gearing was modest at 2.7 times and balance sheets were in their best shape ever with unsecured debt as a percentage of total debt reaching a high of 60%.

The data in Leasing Top 50 shows a decline in lease-yield, continuing its trend of the last several years and an increase in average debt costs. The result is a narrowing of the “spread” between them to 7.5% from 8%. After accounting for maintenance, selling, general and administration expenses, depreciation, interest plus impairments of $410 million (up from $260 million last year) net income declined 10% to $4.6 billion.

With the net income decline and sizeable retained earnings built up from prior years, the industry’s return on average equity fell to 9.7% from 11.4%. The detailed study shows a range from -43% to +30% among the 24 lessors.

The lessors’ capacity to navigate through the pandemic will be visible in the quarterly and semi-annual financial statements for the 12 lessors who publish them. We will have to wait for the full-year 2020/21 financials for those that do not. Airfinance Journal will be publishing an additional report in the week commencing 16 November that delves into the details of the quarterly and interim releases and presents relevant market data covering lessors’ financial condition and performance.

Lessors have been very active in the bank and capital markets this year as the following data from Airfinance Journal’s Deal Tracker shows. A select few were also active in executing purchase and leasebacks with airlines that were seeking to build their liquidity. That, in turn, generated further fundraising exercises by some of the lessors.

With the onset of Covid-19, lessors faced numerous requests for rental deferral from their operators and the financial markets and investors took fright. At the peak of the crisis in April, unsecured bond yields blew out and share prices declined as much as 60%. Fortunately, many of the world’s airlines showed significant resolve to create liquidity for themselves through commercial market financings, sale and leasebacks, equity raisings and government supported facilities which somewhat ameliorated the credit outlook for the leasing community. 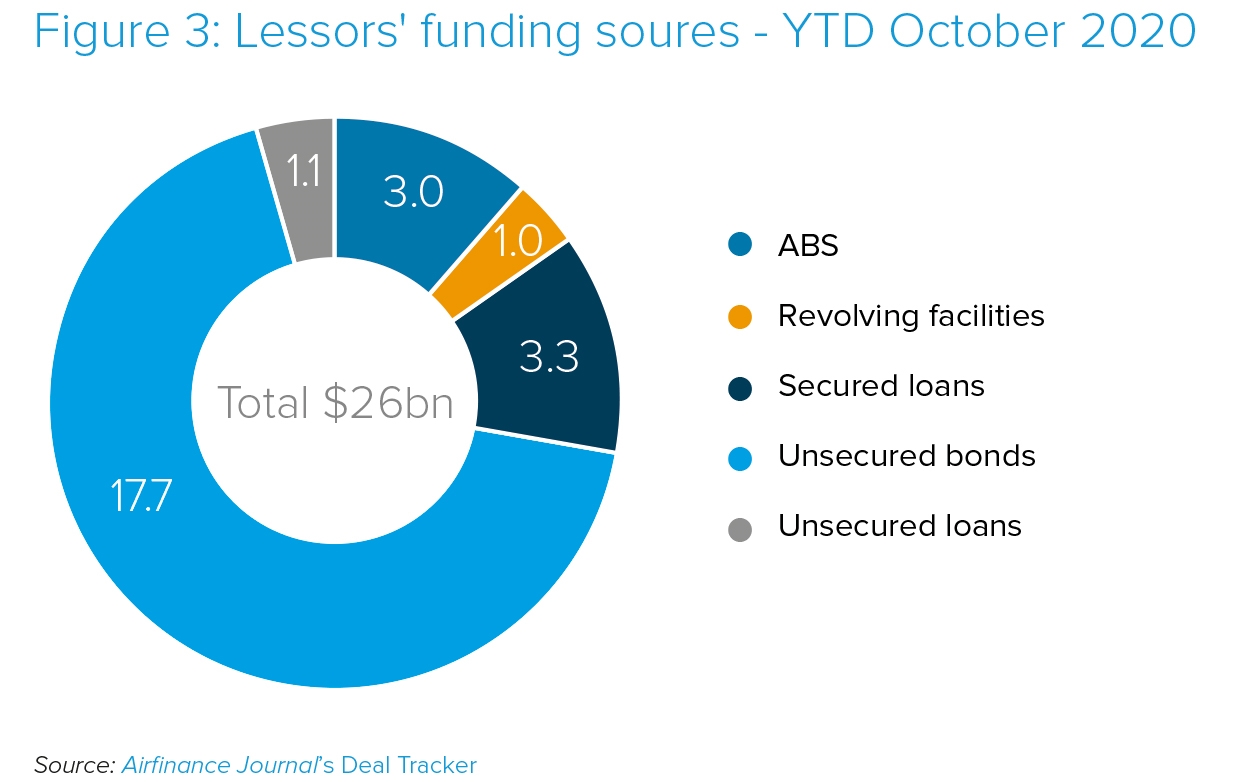 The announcement on 9 November of the successful testing of the Pfizer Covid-19 vaccine brought some much-needed cheer to the sector. Lessor share prices responded with significant gains and bond yields tightened.

The major lessors’ earnings calls of mid-November presented an optimistic outlook. Lessors’ cash flow from operations was said to be recovering strongly from the extremely weak second quarter of 2020. Deferral activity was stated to be reducing. It was suggested on one of the calls that airlines could achieve cash break-even at 60% load factors. By contrast, IATA, in their report dated 30 October, set out the significant challenges airlines will face to achieve cash break-even in 2021. And no doubt one element of that will be reducing fleet costs to match supply to demand.

It is too early to say the industry is out of the woods. Per IATA’s figures, the median airline liquidity buffer covers 8.5 months’ operations only. While the progress on the vaccine is very encouraging, many airlines are tracking to run out of cash before it can be fully deployed, with severe consequences for the lessors. That helps explain why listed lessors’ share prices remain in a range of 40-80% of their values at the beginning of 2020, even after the run-up in the week beginning 9 November.

To help assess the outlook for the aircraft leasing industry, please request a copy of the Leasing Top 50 supplement and our forthcoming special report Lessor Financial Update. And consider a subscription to The Airline Analyst for detailed financial data on 220 airlines.