Airbus has delivered its 100th Airbus A350 aircraft, 30 months after the first delivery of its latest widebody aircraft to Qatar Airways.

The Toulouse-based manufacturer handed over the 100th aircraft to China Airlines.

“The 100th A350 XWB milestone comes as we reach our fastest widebody production ramp-up, on track to meet the target of 10 A350 deliveries per month by the end of 2018,” says Fabrice Bregier, Airbus COO and president commercial aircraft.

The delivery is the Taiwanese carrier’s seventh unit and the third A350-900 that it has received this year. The other four were delivered in 2016, according to Airfinance Journal’s Fleet Tracker.

To date the A350 has been delivered to 14 airline customers and Fleet Tracker shows that 56 deliveries have been made to seven Asian operators. 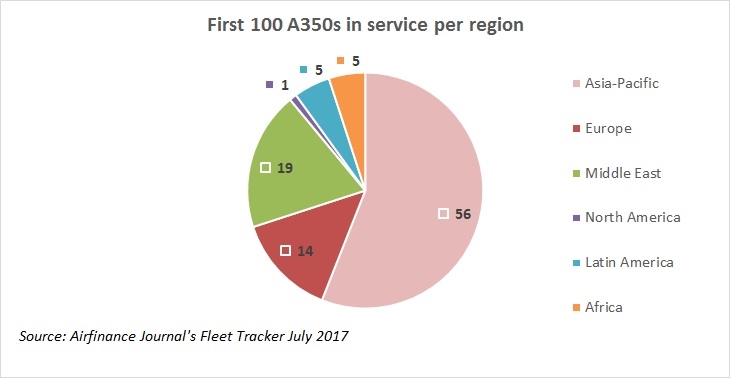 The Middle East represents 19% of the active fleet with 18 deliveries, while Europe has 14 aircraft among three operators. Africa has five with Ethiopian Airlines. Latin America and North America have just two units.

Of the 100 deliveries, lessors account for 39 deliveries and airlines own the other 61 aircraft.

Lessors have placed a total of 66 direct orders for the type. Fleet Tracker estimates that 15 deliveries were “pure operating lease” transactions. Sale-and-leaseback deals accounted for the remaining 24 lessor deliveries.

AerCap is the largest A350 lessor with 15 units currently in service. The Dublin-based lessor has two units with Vietnam Airlines, two with Cathay Pacific Airlines, two with Ethiopian Airlines, two with Air Caraibes and two with Sichuan Airlines. It originally placed aircraft with South American carrier LATAM, but four units moved to Qatar Airways earlier this year under six-to-12-month leases.

GECAS is the second-largest A350 lessor with 11 units leased to Finnair and Qatar Airways.

Avolon has two units with Thai Airways International and another two with Vietnam Airlines, the data shows.

Amedeo has acquired its first unit, via Amedeo Air Four Plus, from ALAFCO. The aircraft has a lease attached to Thai Airways. 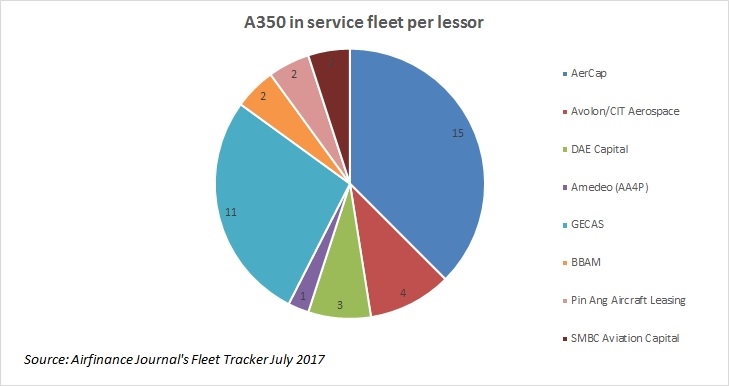 DAE Aerospace has three A350s on lease to Vietnam Airlines.

SMBC Aviation Capital has two A350-900s on lease to Asiana Airlines. Both units are part of a six-aircraft package acquired under a sale-and-leaseback deal.

Airlines have used various sources of financing but sales and leasebacks represents a quarter of the deliveries so far, Deal Tracker shows.

Finnair sold five units to GECAS and LATAM agreed a deal with AerCap for nine aircraft.

The first A350-900 was first delivered to Qatar Airways in December 2014 and was financed by GECAS. The lessor has four more units with Qatar Airways under sales and leasebacks.

Qatar also sold two units on delivery to BBAM under sale-and-leaseback deals. It also mandated BOC Aviation in December 2016 for another six aircraft.

Asiana Airlines has mandated six deliveries to SMBC Aviation Capital in a package that includes pre-delivery financing. Two units have been delivered.

The Hong Kong-based carrier has also mandated a delivery to Credit Agricole-CIB and another two to undisclosed lenders.

China Airlines has financed four deliveries with Bank of Taiwan and Bank of Communications as overall arrangers of debt facilities.

DVB provided the debt for DAE Capital on one unit, on lease to Vietnam Airlines. National Bank of Australia was the debt and overall provider, along with Korea Development Bank as debt arranger.

AerCap financed three A350s on lease to LATAM through the commercial debt market in 2016, with BNP Paribas acting as senior lender. The other senior lenders were Development Bank of Japan, KfW IPEX-bank, Helaba and Sumitomo Mitsui Banking (SMBC). Investec Bank was the junior lender.

Finnair has used the Japanese operating lease with call option (JOLCO) market on three deliveries while Lufthansa has refinanced one delivery in the JOLCO market.

The A350 model featured in Labrador Aviation Finance’s asset backed securitisation in 2016, while two LATAM A350s featured in the Latin American carrier’s C tranche of its 2015 EETC.

There has also been appetite from the Korean investor market. Mizuho Securities and South Korea’s Meritz Securities set up a fund of about $900 million to acquire a 20-aircraft portfolio from GECAS, although the National Pension Service backed out of the fund.